skip to main | skip to sidebar

Only Child and Feminism, Take 2...

On Friday, Daphne, contributor Amy Richards, and I were guests on "The Judith Warner Show" (XM radio). I'm a fan of Judith's book, Perfect Madness, and many of her feminist inklings dovetail with mine. Things I wished I had said but did not have a chance to on the air:

In the 1970s, the mother who chose to have 'only one' was sometimes stigmatized for selfishly privileging her desire to have a career over her desire to raise a brood. I wonder how the stigma Boomer women may have felt different from that experienced by today's mother-of-one. *Is* there a strong stigma today, and if so, is it perhaps differently inflected? Parent friends who ask us about our experience as onlies often seem so anxious - is this related, I wonder, to the intensive parenting Judith writes about so eloquently in her book? That is, the imperative to do-what's-best-for-your-kid at the expense of personal fulfillment, and the return of a new kind of feminine mystique.

I'd be curious to hear what others think.

Labels: only children, sisterhood is...

Only Child Blows Through Windy City 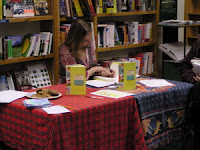 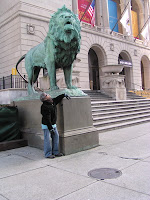 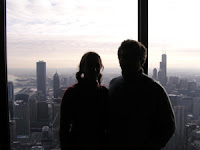 I'm in Chicago -- town of my roots -- and had two very fun readings. One was at The BookStall, in Winnetka, and the other at Congregation Solel in Highland Park. I was touched that so many people I knew came out to show support, including childhood best friends and some of their siblings, tons of family friends, my grandmother, two great aunts, and my high school English teacher Sherry Medwin. Felt like a minor local celebrity - thanks, guys!! Some pix, including a mystery shot of me and Marco at the top of the John Hancock (guess who's who), Marco and the lion, me at The BookStall.
Posted by Deborah Siegel at 3:19 PM No comments: 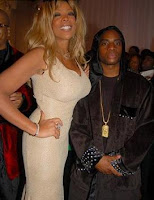 Yesterday Daphne and I were guests on “The Wendy Williams Experience” on WBLS radio – and what an experience! After parking us in an office with hot pink walls decorated with life-size photos of dazzling Wendy (left), the producer, Nicole, shuttled us down a hallway, opened a door, gave us headphones, and there she was, behind the mike: The queen of radio, wearing Uggs and a tiara.

Daphne and I fielded calls from listeners, lots of moms asking for advice on how to keep their onlies from being lonely/spoiled. Wendy, herself mother to an only, brought up the “selfish woman” stigma. And the conversation also veered toward the subject of women “starting later,” as my friend Rachel Lehmann-Haupt calls it in her forthcoming book on the subject. Wendy has 12 million largely African American female listeners, and I wondered how the stigma of the only child seemed to them….

A serious shout out to Wendy for plugging our book so thoroughly and so graciously. (And for being, well, Wendy! I seriously wish I could be her when I grow up.)
Posted by Deborah Siegel at 10:47 AM 2 comments:

When Daphne (my coeditor on Only Child) and I are asked in interviews why there's been such an increase in onlies in recent decades, the answer is that women are marrying later, having children later (and therefore generally having fewer), the divorce rate, and economics (it's never been more expensive to raise a child - and not just here in NYC). We're asked about the stigma that still seems to exist in spite of the fact that single-child families are increasingly common. Feminism has allowed women to feel more comfortable having only one, but women who have "just one" kid still often seem pressed to defend their choice.

This quandary is interesting in light of Linda Hirshman's recent advice to women who want to stay in the labor force: Have a child, just don't have two, she tells women in her book *Get to Work.* While I'm not so sure that the single-child family is the ultimate solution to the work/life crunch (it's companies, not American family size, that clearly need to change in my opinion), there's no doubt that life is easier for the working woman who just has one. I can't speak (yet) from personal experience, but I'm pretty sure that my friends who have more than one would agree. Is it possible that, after all these years, women who choose to have an only because they want to continue with their careers are still seen as somehow "selfish"? Is this what the stigma is still partly about?

Last week's Boxer-Rice exchange makes me realize all the more the furor around those who chose to have none. Boxer's comments about how Rice is not paying the direct price for the Iraq war (as measured in lost children) was quickly spun as unsisterly speculation about Rice's childless, unmarried life. Since I'm generally a fan of Boxer's, I'm loathe to believe she was going for the jugular in the way all the spin suggested. And having just turned in a book on feminist in-fighting, the rush to turn this into a catfight made me, well, tired. But I did perk up when I read that Condi (regardless of how I feel about her) was also an only. As Broadsheet reminds us today,

in December, First Lady Laura Bush told People magazine that Rice probably wouldn't run for president, in part because she is single and has no immediate family. "Dr. Rice, who I think would be a really good candidate [for president], is not interested. Probably because she is single, her parents are no longer living, she's an only child. You need a very supportive family and supportive friends to have this job."

So, wait, an only child can never be President? Hmm... Not so sure about that.
Posted by Deborah Siegel at 9:17 AM 4 comments:

Labels: only children, sisterhood is...

A Party of Many Ones 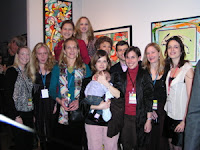 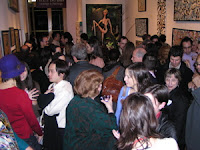 I'm still recovering from our book party blow-out bash -- which was, Daphne and I agreed, more fun than we had even imagined it would be (and we had imagined some pretty huge fun). The gallery was packed with around 300 people, and all but one of our NYC-based contributors showed up. Check them out - not only are they stellar writers, they're gorgeous (photo on the left, from the left: Sara Reistad-Long, Molly Jong-Fast, Kathryn Harrison, Lynn Harris, Janice Nimura, Sarah Towers, Alissa Quart; next row: Daphne, me, Betty Rollin, Peter Terzian). Thank you to all -- friends, family, contributors, others -- who came out to help us celebrate!
Posted by Deborah Siegel at 1:36 PM No comments:

Folks have been asking where we'll be doing readings and such. I'm keeping an updated list of appearances and events (like readings with our contributors here in NYC and a workshop with my mom, a child psychotherapist, in Chicago!) on my website.
Posted by Deborah Siegel at 8:45 PM 2 comments:

NYC: Only Child Capitol of the Nation

Just got a call: We'll be on New York 1 tv tomorrow at 1pm. For any locals, tune in!
Posted by Deborah Siegel at 6:07 PM No comments:

Greetings from the land of ONLY CHILD 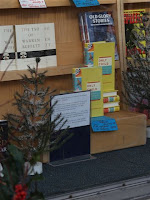 ONLY CHILD: WRITERS ON THE SINGULAR JOYS AND SOLITARY SORROWS OF GROWING UP SOLO, the anthology, launched last week and it's been a whirlwind! Here's a photo of the book in the window of my hometown bookstore in Winnetka, IL.

Daphne and I had big fun with our live tv appearance on Sunday at CBS. A thousand cheers to Karen Braga, media coach extraordinaire, for helping us transform. You can see the clip - and check out the latest parenting advice (?!). Make sure you're in the "video" section, and search for "only child."

All the reporters who interview us seem to be either onlies or parents of onlies, so they've been fun conversations. Here's the latest, an article called "When You're The One."

Next up: Daphne and I will be interviewed (live) on Good Morning America Radio tomorrow at 10:20am ET. (GMA Radio airs on Take 5, XM 155, which is a female-targeted station on XM Satellite.) And our book party is tomorrow night, where we're expecting over 200 people (yikes). Daphne found us an amazing gallery to hold it in. Our editor and our publicist are both onlies, and it sounds like lots of our friends are bringing friends of theirs who are onlies too. We're handing out nametags that say "I ___ an only" for people to fill in the blank (I am/parent/love/hate/date an only) - I'm daring Marco to write something racy on his. Lots of the contributors are coming, so we'll get to toast them in person. All my adult life I've daydreamed about "the book party" and now here it finally is. Very excited to wear my new party dress!
Posted by Deborah Siegel at 12:43 PM 5 comments:

Deborah Siegel
GIRL WITH PEN dispels modern myths concerning gender and encourages other feminist writers, scholars, thinkers to do the same. The week of Oct. 7, GWP will officially become a group blog. Join our email list for periodic updates on GWP webinars and events, feminist publishing news, and more. For more on GWP's creator, Deborah Siegel, please visit her personal website at www.deborahsiegel.net.

Bring Deborah Siegel to speak or give a workshop at your campus or organization in Fall 2008! For speaking engagements, please contact Speaking Matters (info@speakingmatters.org, 212/725-5547). For workshops, please contact Kristen Loveland at kristen.loveland@gmail.com.